Let's see what U.S. leaders swore to do but apparently have not done.   Senators, Representatives and all executive and judicial Officers are bound by Oath or Affirmation, to support the U.S. Constitution.  Below are the Oaths for president, vice president, members of Congress (House & Senate), & Supreme Court justices.


(The vice president's oath is the same as for members of Congress.)

"I do solemnly swear (or affirm)
that I will support and defend the Constitution of the United States
against all enemies, foreign and domestic;
that I will bear true faith and allegiance to the same;
that I take this obligation freely, without any mental reservation or purpose of evasion;
and that I will well and faithfully discharge
the duties of the office on which I am about to enter: So help me God"

"I, [NAME],
do solemnly swear (or affirm) that I will administer justice without respect to persons,
and do equal right to the poor and to the rich,
and that I will faithfully and impartially discharge and perform
all the duties incumbent upon me as [TITLE]
under the Constitution and laws of the United States. So help me God."


The Supreme Court justices seem to have violated their oaths in this case.   I think Mr. Noack contacted his representatives in the U.S. House & Senate (GOP members; so red letters), as well as President Obama, and perhaps Vice President Biden, as well.  So far, none seem to have returned contact to him with any display of loyalty to their oaths of office (regarding the apparent violations of the U.S. Constitution in this case).  Yet, most of them swore before God to do that very thing - to take action on behalf of the Constitution!

Other aspects of oath-breaking seem to be involved, too, since the case involves a poor person and a wealthy employer, claims of discrimination against men & blacks (gender & racial), and claims of wage Law violations. (See oath for Supreme Court, above.)  As Commander-in-Chief & leader of the Executive branch, the President must consider his obligations & abilities.  Congressional members also can intervene against recalcitrant Supreme Court Justices who trample our Constitution & their oaths.

Now, just to be fair about all of this, I think the NAACP and the ACLU have been contacted, too, yet they too failed to
care.  If  Noack were black would they have cared?  The case is relevant to minorities' rights, so what's up?  Where's Rev. Jesse Jackson,  Al Sharpton and Quanell-X on this?  Somebody has contacted them, too, and they haven't bothered to help.
Maybe they don't care only because Mr. Noack is "white", although he stood up on something that could help blacks.  What a pity.

Ah, and where's the Conservatives who rant about the Constitution?  Is that bravado reserved for what's convenient or for special interests?  Are special interests pulling all the strings on the right & the left?  What about the Libertarians & other 3rd parties?  - Call your talk radio shows, etc. & see what they have to say about it.
Below, see a "Dear John" letter to Mr. Noack from one of his Texas' Senators, John Cornyn.  Senator Cornyn seems to lament an inability to do anything.  Is he jumping ship on his sworn oath, ignoring the fact that, as a member of the Senate Judiciary Committee, he could compel an investigation?  He can make a huge fuss by also publicly asking the President to order an FBI investigation and can address the alleged evidence-tampering.
Actually, it's his sworn duty to do so - in light of evidence that courts have ignored the Law & the Constitution!

Senator Cornyn's response seems to be a call for the fox to guard the henhouse!  If judges are corrupt, will they police themselves?!   No!  - It's the duty of the other branches of govt to act as safeguards: that's why we have a system of "checks & balances" in govt.!   Courts should not be allowed to simply ignore the Laws, legal precedents, the Constitution & the evidence all on their own whims : http://supremelyunjust.weebly.com/email-evidence.html. 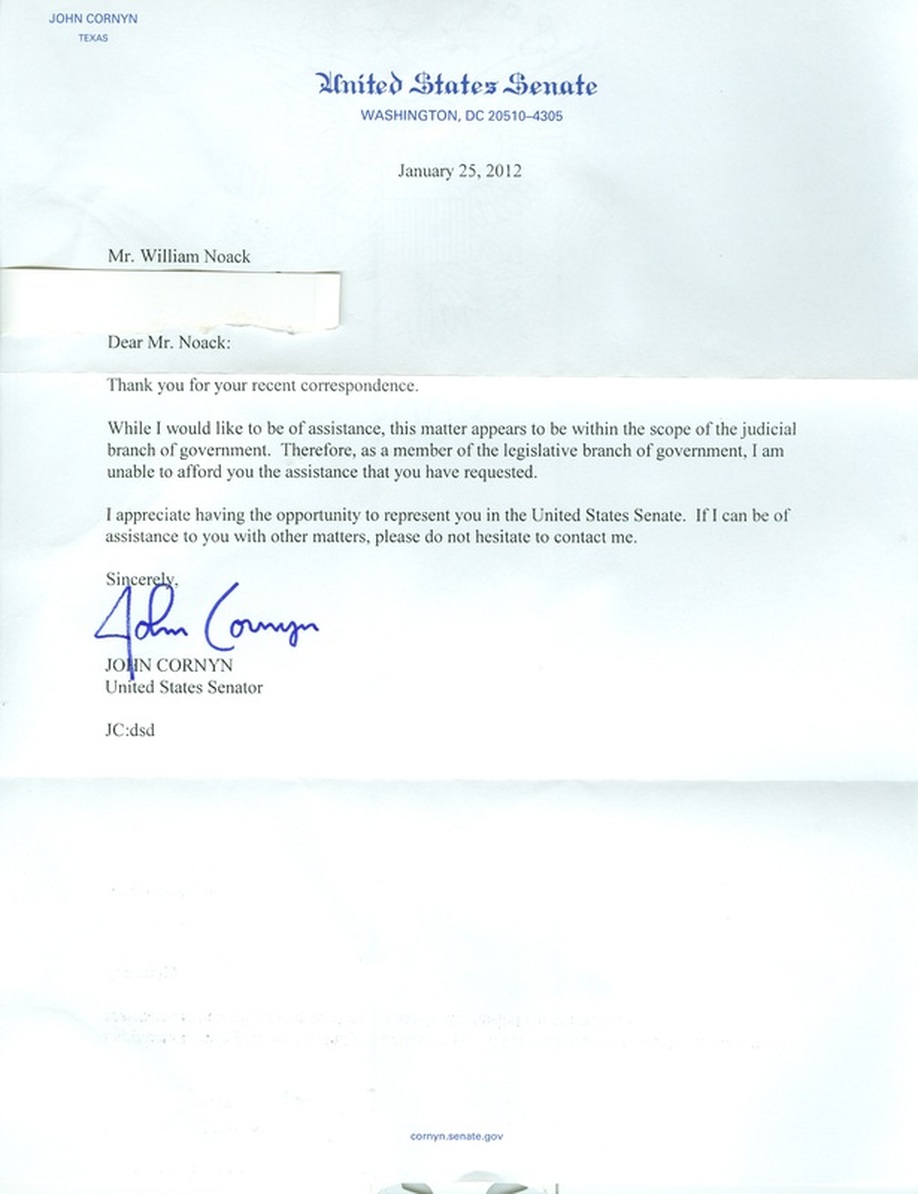