See "What CAN You Do?" to help - http://supremelyunjust.weebly.com/what-can-you-do.html. *
YOU CAN NOW DONATE FUNDS TO HELP THE VICTIM: https://goo.gl/M3Afj9 .
The man is now under pressure to move, which could make him totally homeless and cause the removal of the evidence of his suffering so many years in tents.  That's important, because when this story become exposed, the Law says there's no statute of limitations on the judicial crimes -- it all goes back to court for him to finally get justice!   The evidence of the harm done to him by the judicial crimes & perjury could be useful in his case.
Is This REALLY Too Hot for the Media?!
Fed Judges Ignored Emails of Refusal to Discriminate...& Employer's Illegal Excuse!
See http://supremelyunjust.weebly.com/email-evidence.html

It's Not Fake - good worker at big NPO ruined for not doing crimes!!!
YMCA work-place evaluations show he was fine worker:  http://supremelyunjust.weebly.com/evaluations-of-mr-noack-by-3-different-supervisors.html.
The man is ruined because he showed integrity and refused to commit crimes!

FACTs Documented in Court
1   NONE of the YMCA affidavits to federal court were notarized.
2   The YMCA & it's employees LIED to labor officials AND in their testimony used in court!
(See sister site, http://stillsupremelyunjust.yolasite.com/.) 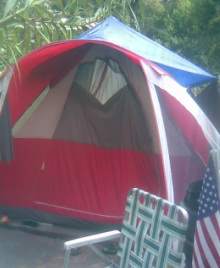 Tent #4
Below, is one of the poor plaintiff's FIVE worn-out tents: he's now in his 7th tent -- and during hurricane season!  The  self-litigant, Mr. Noack, asked the U.S. Supreme Court to uphold the Law & U.S. Constitution, but they refused to care or take up his case, although many legal cases show he had enough evidence to compel a jury trial.  This  website shows just some of the evidence & case arguments.  His sworn testimony, (see drop menu) alleged years of ongoing discrimination against himself (a white male),  against blacks, and men in general while working with youth.  Other claims included wage fraud, physical assaults, & more while working at a wealthy U.S. YMCA where the CEO was earning an astounding NPO salary of over $1/2 million per year.  (See link on the  "What CAN You Do?" page.)  The plaintiff proved his opponent repeatedly lied, but was  illegally kicked out of court without a jury being allowed - a big help to the employer.  Proof of illegal activities:  http://stillsupremelyunjust.yolasite.com/   -- that is, lies & perjury by the employer, misdeeds by the judges, labor officials' rubber-stamping the case, and the poor man protesting the corruption against him to the district court's magistrate judge, who cited the perjury as if true.
Labor officials had sworn testimony of  a "sort of slavery" and "abuses" of various types and that  he and others were allegedly ordered to give "$1K/yr."  to the YMCA's  P.O.Y. (charity) fund. (See next-to-last page at  http://supremelyunjust.weebly.com/sworn-labor-complaint.html.)    Mr. Noack worked there  8+  years, from a bottom-rung, part-time job to a fulltime position.  Work evaluations (drop menu) indicate a fine employee.  Rampant judicial problems bleed through in reading the arguments or reasons section of his Petition for Writ of Certiorari, (partially shown in PDF's below & more fully at the other site).
Among gross oddities in the case is that Mr. Noack easily surpassed the level of evidence needed to proceed to a jury, as shown in the  "reasons" section, below (& cont'd. elsewhere).  A HUGE problem: courts IGNORED the 7th Amendment  of the U.S. Constitution!  http://supremelyunjust.weebly.com/they-swear-what.html (on drop menu) shows the Supreme Court justices swear to uphold the Law and Constitution.   The  Sworn Labor Complaint  (top link) shows claims of physical assaults, and an email evidence page, (http://supremelyunjust.weebly.com/email-evidence.html),  seems to prove brazen judicial corruption    Documents  exposing  false affidavit testimony done against Mr. Noack -- (http://stillsupremelyunjust.yolasite.com/explain-this-ymca.php) -- reveal blatant fraud and maybe even forged testimony.  Other documents show the YMCA also lied to labor officials - (http://stillsupremelyunjust.yolasite.com/lies-to-labor-agent.php).   That's really BAD stuff!
Info. on the 7th Amendment (http://www.law.cornell.edu/anncon/html/amdt7frag1_user.html) and English common law of the period show the judge is an administrator in jury trials and with Law based on legal precedents.  Lower courts ignored precedents, and The Supreme Court (by its denial - next page) and others despotically laid aside Mr. Noack's basic rights.  That should outrage America.  Judges can't simply lay aside the Law & Constitution!  The stench of corruption is bad in this case.  Moreover, "Conspiracy Against Rights" (see bottom of page) adds another twist.   Perjury. fraud, etc. could lead to prison sentences for any found guilty.  Oddly, this case seems to have a news blackout that makes me wonder even more what "power-mongerers" are doing in it all!

Why all the hush?   (No media coverage, despite proof of crimes!)

WHO will stand up for our Laws & Constitution?     --  The courts evidently haven't!

SHEEP are led to slaughter.
Can Americans no longer stand up for their rights & freedom?
Are we a nation of sheeple told what to do as our legal & Constitutional rights die?
Yet, so many are willing to be led overseas & danger to help USA- haters.
CAN sheeple-people keep America free from tyranny?
..... Do our laws & Constitution mean ANYTHING?


This part of our U.S. Code could probably relate to a number of govt figures and others, but this site is about Mr. Noack's case.
It's a start.   If we prosecute the govt. crooks involved in this, it will send a message that we won't tolerate their crime, cronyism, tyranny, & disloyalty against America!  It would also help Mr. Noack & perhaps others, too.
Please, tell our govt leaders to ACT....NOW! 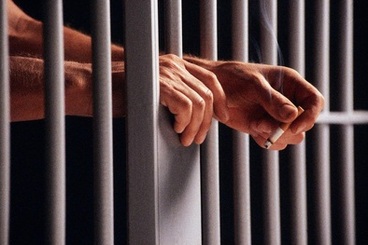 Shouldn't villains
in fancy clothes
get prosecuted, too?

If drug-dealers & rich crimelords go to jail, why not crooked officials?

Fancy-clothed pimps get arrested, so
why not arrest felony-committing  judges who ruin the lives
...of those REQUIRED to TRUST THEM? 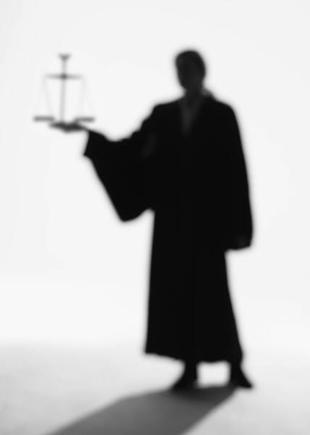 
Let there be...
"... justice for ALL."
(last 3 words of U.S. Pledge of Allegiance)
The Petition for Writ of Certiorari documents below are reproduced with some redaction of contact info.   Not all appendix items are shown.
The arguments section is an eye-opener, but the rest is interesting, too!!  The man is a patriot, and his arguments hit like a machine-gun of truth!   Also, see 18 USC 241, "Conspiracy Against Rights" (above), plus the 7th Amendment to the U.S. Constitution.   A list of possible crimes involved is at http://stillsupremelyunjust.yolasite.com/what-crimes.php. 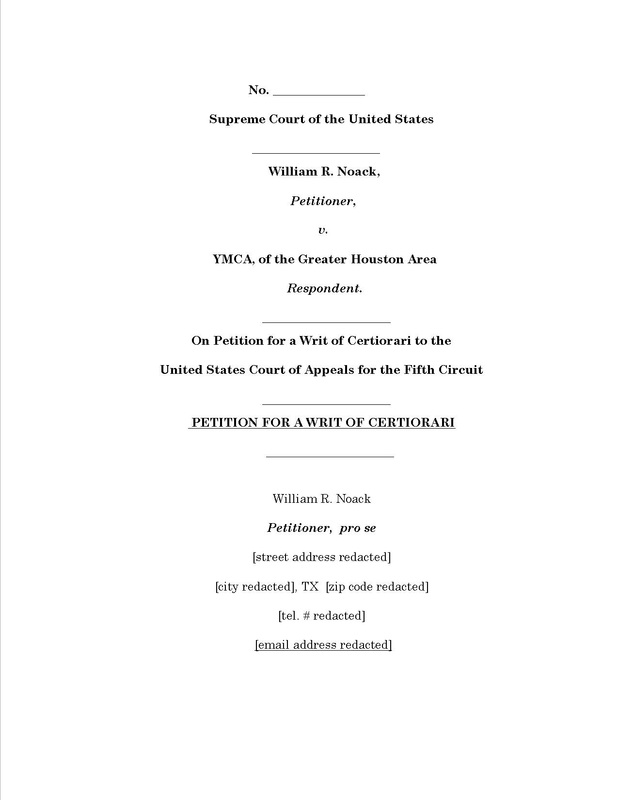 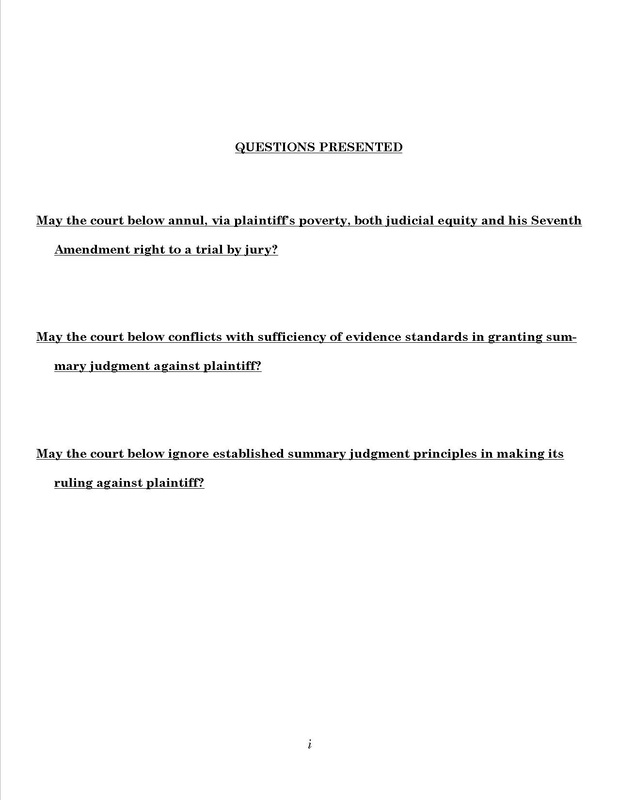 Below are pages from the arguments section showing courts ignored the Law, the evidence & the Constitution!

Remember, the claims in these documents are the views of the plaintiff in the case.
There was no trial -- no jury was allowed to see the evidence!
These items are being reported to show the plausibility of inappropriate court activity.          This is done as a public service. 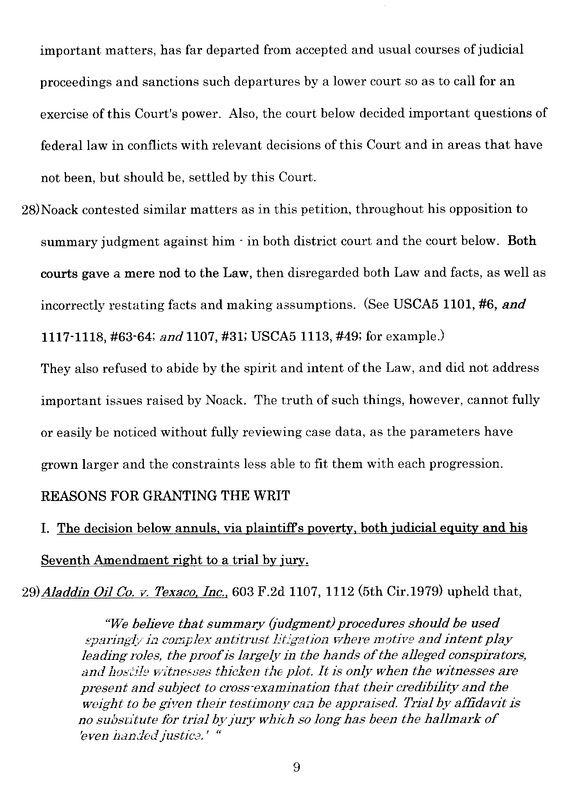 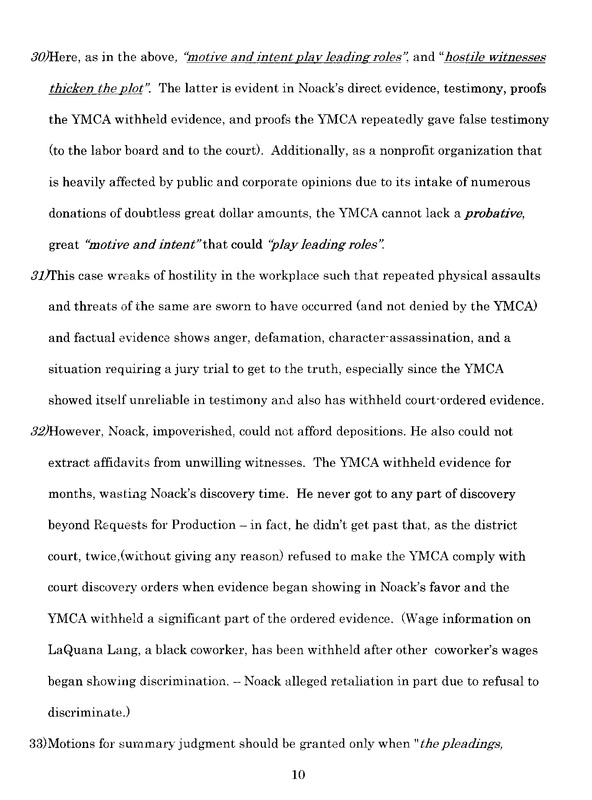 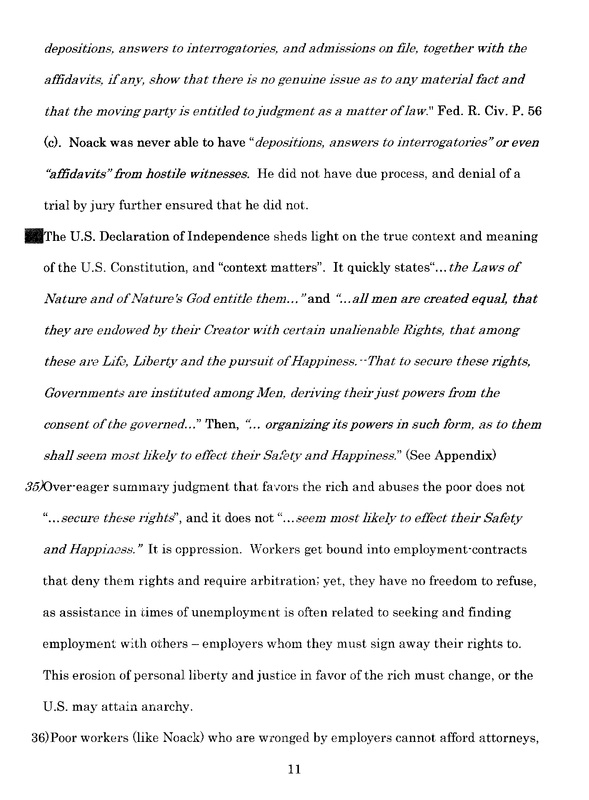 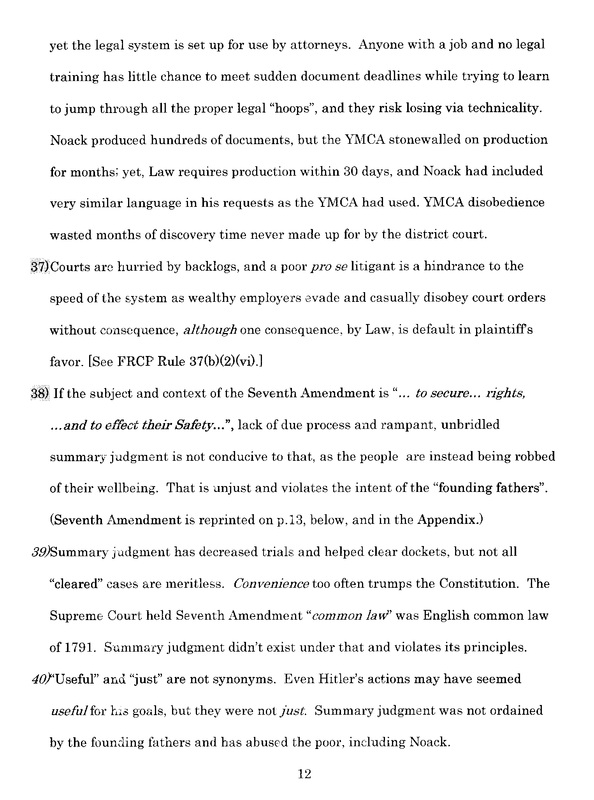 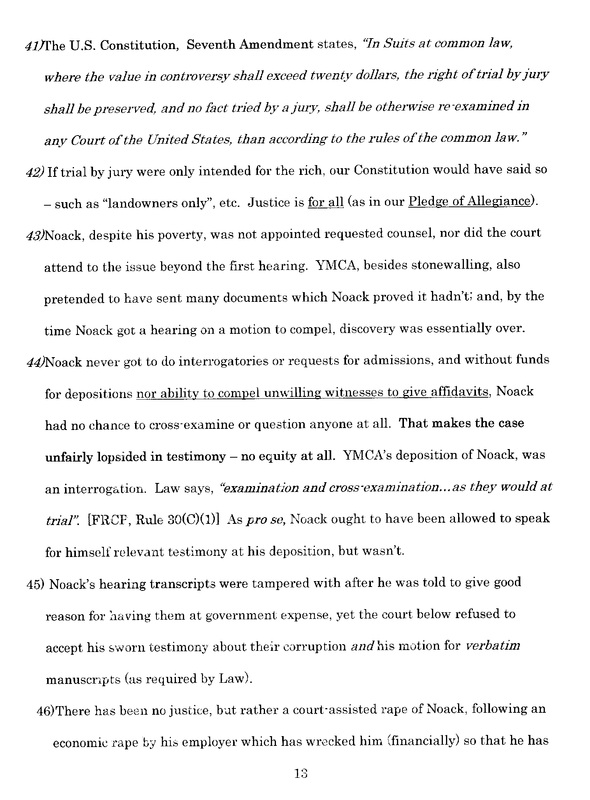 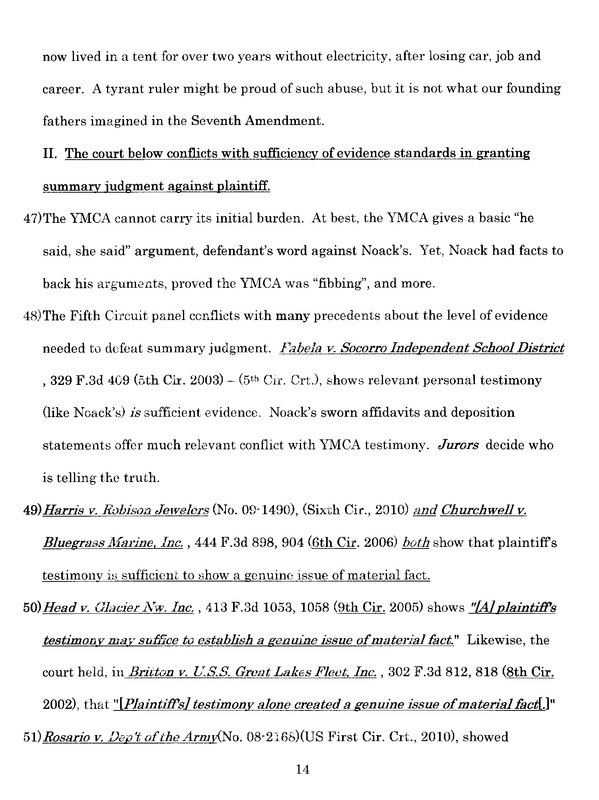 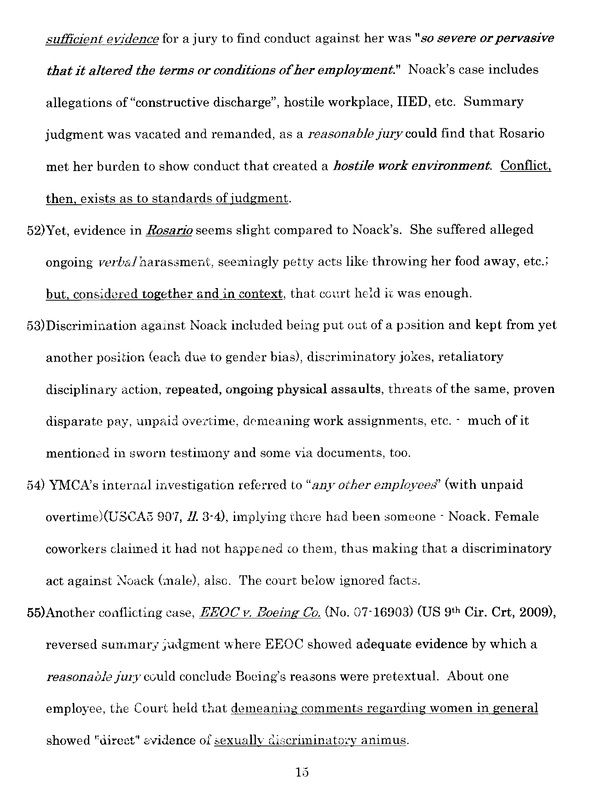 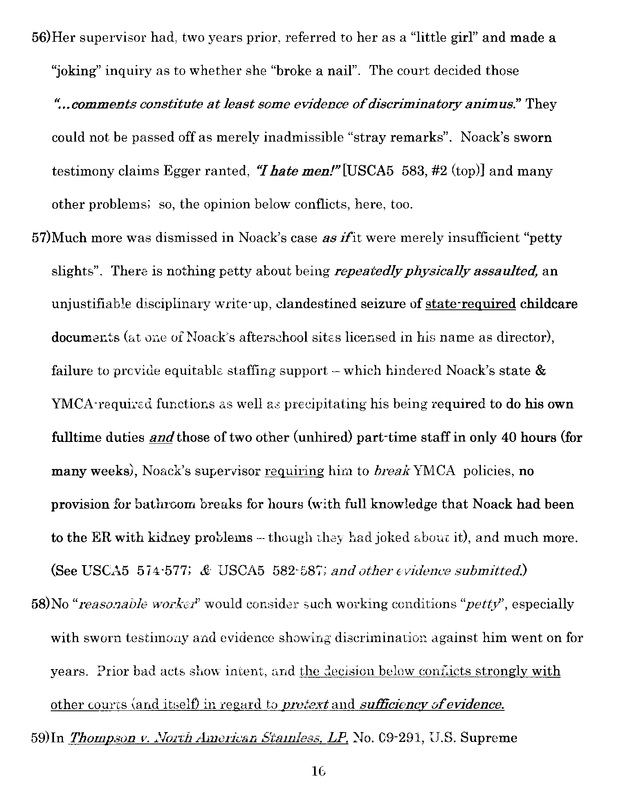 There is an account to help Mr. Noack with new jobskill training at  https://www.wepay.com/donate/91753  (asking  mere $1 donations), or a new donations page on GiveForward with lower fees, directly-connected to Mr. Noack: http://gfwd.at/14yaW94, who lost his career, prof. cert. and license (not his own fault) as well as his new Chevy Aveo (repo'd).

A site called http://rainingdaylight.angelfire.com/  has more info. on the case.
Another page, http://supremelyunjust.weebly.com/what-can-you-do.html, shows ideas on how people can help (like tweeting this
site's URL)!
Again, if anyone thinks this is all pretense, there's now a YouTube video by LawlessAmerica.com showing Mr.
Noack in a short videographed speech to Congress about the corruption against him: http://www.youtube.com/watch?v=93wZVF4EKNM.
While not the most gifted speaker, the gist of his words speaks volumes on the foul state of  our U.S. govt & courts.
It can also be easily noticed that many documents evidencing the crimes against him have a court code on them (lower, righthand corner).  That means they were among court records, were used during the legal process, and are apparently quite legitimate!   The "USCA5" part indicates it was on file with the U.S. 5th Circuit Court of Appeals in New Orleans, LA, USA, and had been introduced as evidence during proceedings in the lower U.S. District Court.  This also all means the corruption, cronyism or "mistakes" (ahem) go upwards quite a ways, so there is all the more need to root it out -- while still possible!